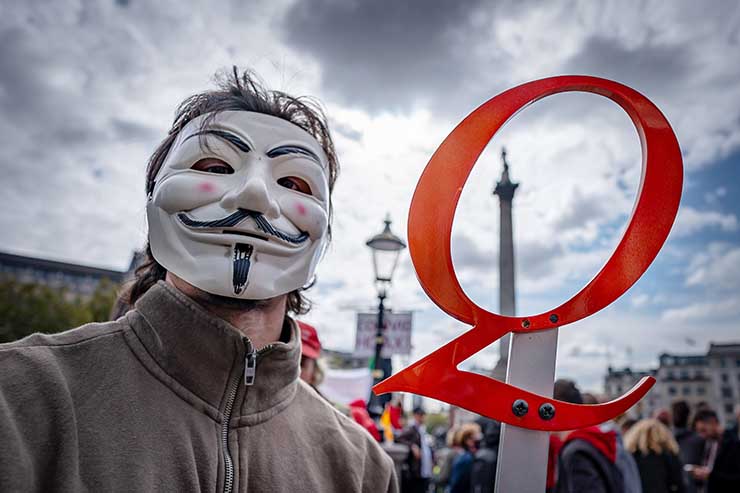 In July, a video entitled ‘America’s frontline doctors’ was a runaway train racing across the major digital platforms. The video – hosted on ‘opinion’ site Breitbart’s Facebook page and spread by notorious influencers and conspiracy groups – claimed that face masks are dangerous, social distancing is unnecessary, and the drug hydroxychloroquine is a miracle cure for COVID-19. It racked up 20 million views in just 12 hours on Facebook alone, before it was ultimately removed by Facebook, Twitter and YouTube for violating their guidelines.

A report by the campaigning network Avaaz reveals that global health misinformation has generated a staggering 3.8 billion views on Facebook in the past year. But the misinformation emanates from a relatively small number of high-traffic websites that pose as news outlets. The top 10 of these disinformation outlets garnered a staggering four times more views than content from the websites of 10 leading heath institutions including the World Health Organization (WHO) and the US Centers for Disease Control and Prevention (CDC). During a severe global pandemic, this rapid dissemination of health misinformation is utterly unacceptable.

One of the United Nations’ most important Sustainable Development Goals is SDG 3 (ensure healthy lives and promote well-being for all at all ages). But the ease with which public health misinformation spreads across digital platforms directly challenges our ability to promote well-being.

Digital superspreaders
Online misinformation has made it more difficult for healthcare professionals to provide meaningful counsel to patients. According to a recent study published by the American Journal of Tropical Medicine and Hygiene, from January to March (when the disease and related disinformation had spread to a fraction of the population they have now), around the world approximately 800 people had died from COVID-19 and 5,876 had been hospitalised as a result of a conspiracy that highly concentrated alcohol could kill the virus, while 60 people had developed complete blindness after drinking methanol as a cure for COVID-19.

The major social media platforms have announced efforts to cut down on this misinformation. In March, Facebook applied warning labels to 40 million posts related to COVID-19. YouTube also removed and demonetised a significant amount of content early in the pandemic. These firms are also working to amplify trustworthy information by steering users to information produced by authoritative sources like the CDC and WHO.

But, as the data underscores, content can spread across the web before fact-checkers have sharpened their pencils. Much like the disease itself, stories that appear on misinforming sites are disseminated by what Avaaz calls superspreaders: pages, groups, channels and influencers with enormous followings. The stories are then ‘aerosolised’ by algorithms that spread them across the web. By the time platforms take action to moderate content, often the misinformation has already gone viral.

Misinformation sites proliferate online, posing as news outlets while repeatedly publishing false content. They present misinformation as opinion to evade fact-checking, paste false headlines on factual stories, or disguise stories’ ownership. Our analysis, using ratings from NewsGuard, a media-monitoring agency, and data from NewsWhip, a media intelligence firm, finds that content producers that repeatedly publish false content or are deceptive in their presentation of content have increased interactions on Facebook in the US threefold since the second quarter of 2017. This growth rivals that of the most reputable sites.

A subset of misinformation sites is dedicated to health. Several of them are thriving on Facebook. Avaaz found that sites like REALFarmacy.com (581 million estimated views on Facebook in the last year) and GreenMedInfo.com (39 million) continue to publish COVID-19 misinformation to Facebook. This is despite Facebook’s terms of service stating that the platform will unpublish the pages of repeat offenders when each page “surpasses a certain threshold of strikes”.

The stories that emanate from these sites are designed to suggest they were reported by a trusted news entity, or that they provide the reader with purported ‘inside’ information that some outrageous claim is true. The pages affiliated with Joseph Mercola, one of the leading purveyors of COVID-19 disinformation cited in the Avaaz report, erroneously claim that “all Mercola articles are fact-checked, vetted and verified using Associated Press and Society of Professional Journalists journalism standards”. In reality, many of Mercola’s health claims have been explicitly debunked by fact-checkers.

Some of these sites build their audiences by paying platforms to promote them. Dangerous content from these sites is then picked up by other pages, groups, YouTube channels and influencers with large audiences – the superspreaders. Journalist Judd Legum has shown, for example, how Mad World News’ five large Facebook pages spread content from American conservative news and opinion website, The Daily Wire.

As the disinformation picks up speed, it becomes airborne due to way the platforms’ algorithms sense content that will keep people online, sharing and liking – which salacious and outrageous content is more likely to do. This content is then automatically placed in recommendations or newsfeeds as if it had been recommended by friends or were breaking news.

Infrastructure of conspiracy
This infrastructure of conspiracy-spreading – stories posted by disinformation sites, spread by networks of pages, channels, influencers and groups, and then pushed aloft by algorithms of outrage – generates revenue for participants and platforms all along the way. The platforms place unrelated ads next to the conspiracy content, often sharing revenue with the carriers of the disinformation. Many of the site owners and account managers hawk often fraudulent health products and get-rich-quick schemes.

Instead of quarantining the disinformation sites and making sure that the superspreaders remain socially distant and hard to find, too often the platforms fail to apply their standards consistently. And when they do isolate an individual conspiracy story, it is often only after it has gone airborne. The damage to public health has already been done.

First, both governments and platforms can help inoculate us all against disinformation by funding and promoting to users a credible independent online platform – a BBC or PBS (Public Broadcasting Service) of the internet: providing public-interest journalism, public health information from authoritative sources, fact-checking and media literacy operations. This can be supported by taxing advertising revenue to restore some of the funds diverted from mainstream journalism while raising the cost of a business model that relies on data collection and the viral spread of disinformation.

Second, platforms must isolate the disinformation websites that pose as news outlets by committing to limit the reach of those websites.

Third, the groups, influencers and channels that boost misinformation should lose their ability to do so if they coordinate in a way that is intended to deceive users.

Fourth, platforms must stop the algorithmic airborne spread of disinformation. Platforms must pause the spread of viral content until they can determine whether it has the potential to do harm once it spreads further, and whether it complies with public laws. Additional changes to algorithms should privilege truth over conspiracy.

Finally, to crack down on the fraud and manipulation that drives this infrastructure, we need radical transparency. Platforms should require that adverts, pages, channels, influencers and groups provide additional transparency about who funds them. Platforms should also disclose the ways in which content is algorithmically curated and moderated. Governments should update and improve enforcement of consumer protection laws, which have failed to keep up with technological developments.

Misinformation does not stop at national borders. Any meaningful programme to address the spread of public health misinformation must rely on national laws, but should be coordinated and monitored internationally.

Initiatives like the G7’s Charter on a Free, Open, and Safe Internet, the Christchurch Call to Action, the UN Counter Terrorism Executive Directorate’s Tech Against Terrorism partnership, and NATO StratCom are developing best practices, sharing information and coordinating responses against the spread of harmful content online, especially violent extremism and foreign election interference. It is essential to build on these initiatives to address online public health misinformation – and other dangerous conspiracy theories – to meaningfully achieve the UN’s Sustainable Development Goals.