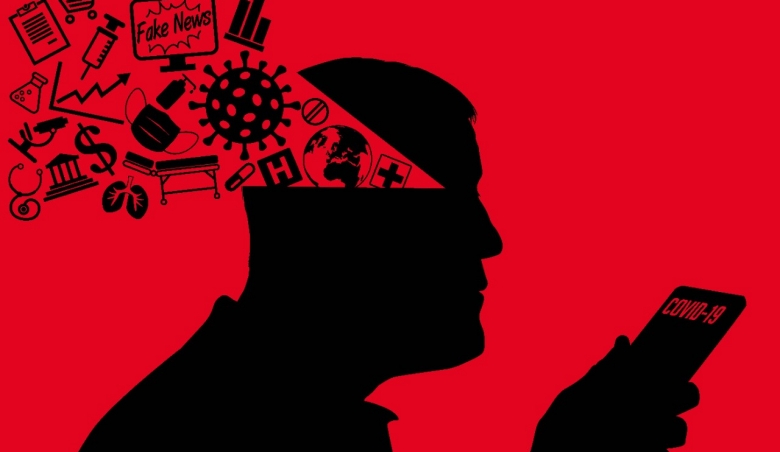 During the second half of 2021, anti-vaccine promoters managed to evade platform policies, distorting the information system with outsize footprints, new data show.

The top-performing website in terms of Facebook interactions on posts that link to the site for this time period was The Daily Wire, which “published unsubstantiated and inaccurate claims about Covid-19,” according to news rating service NewsGuard. Four of The Daily Wire’s ten best-performing articles on Facebook from the second half of 2021 were critical of vaccine mandates, and two of them were in the top 20 Facebook posts by engagement during that time period. These included a petition urging that users “DO NOT COMPLY” with “Biden’s authoritarian vaccine mandate.”

The Daily Wire is the most popular news publisher on Facebook, generating high interactions on posts about politics, Critical Race Theory, and vaccines. It was the top-performing website overall in the second half of 2021, every single week of the six-month period. Altogether, in the second half of 2021, The Daily Wire had more Facebook interactions than The New York Times, Washington Post, Wall Street Journal, Los Angeles Times, and NPR combined. As shown in the chart below, The Daily Wire outpaces the other top outlets that gather and present information irresponsibly and had 130 million—or 147 percent—more interactions than NBC News, the top outlet that adheres to all nine of NewsGuard’s credibility and transparency criteria. 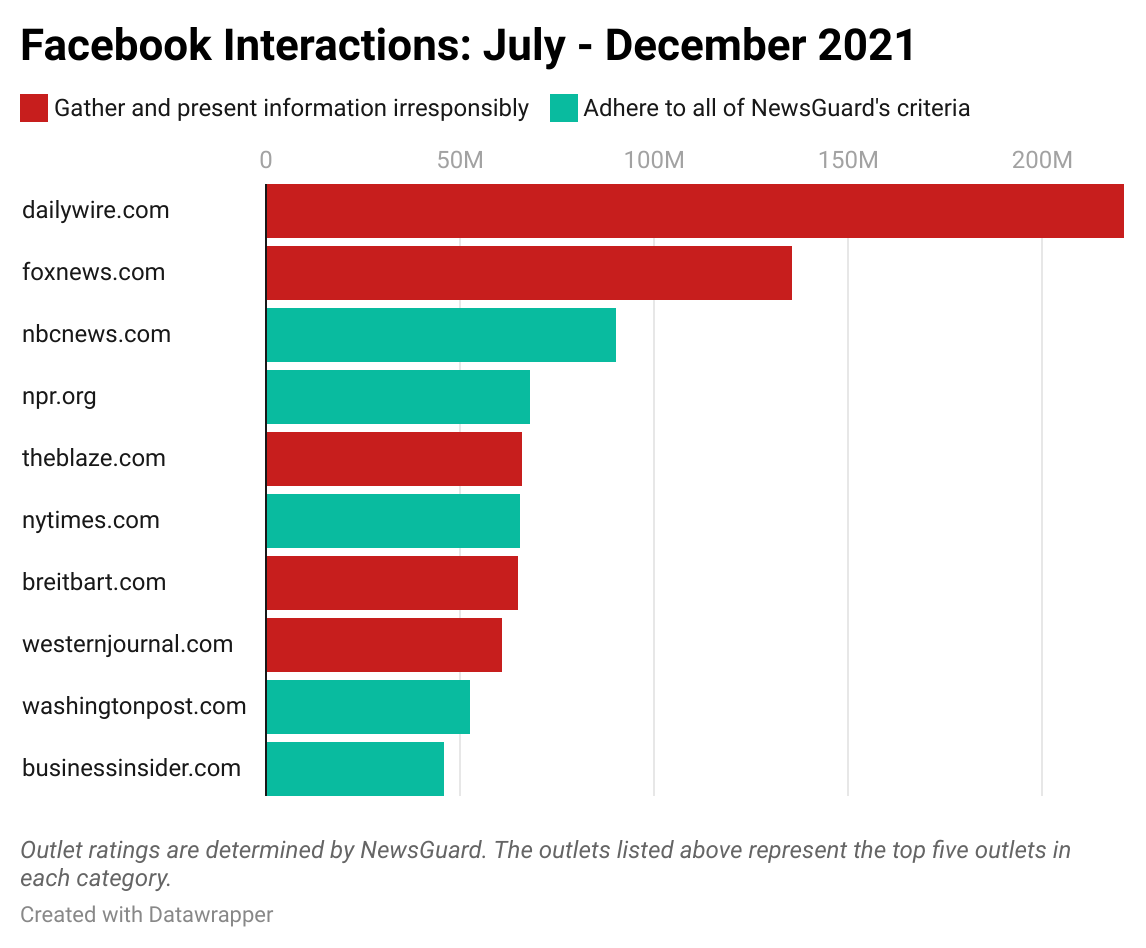 The Daily Wire’s engagement was also bolstered by content criticizing the Biden administration. Of all the news sites assessed, The Daily Wire netted the most Facebook interactions on articles that mentioned both President Biden and vaccines, with roughly the same number of interactions as CNN, The New York Times, and Washington Post combined. Many of these posts lauded state-level efforts to ban vaccine mandates and passports, such as in Texas and Florida, or amplified anti-vaccine mandate rhetoric from public figures.

The Daily Wire’s social media presence has been increasing since 2020. The site was founded in 2015 by conservative activists Ben Shapiro and Jeremy Boreing and had a limited presence on Facebook during the 2016 election. Its interactions more than doubled from 2019 to 2020—topping out at close to 300 million interactions per quarter—and then remained high in 2021. The Daily Wire’s interactions fell 14 percent in the second half of last year, but it fared well compared to other sites. Fox News and The New York Times, for example, saw sharper drop-offs, with each suffering a 60 percent decline in interactions from 2020 to 2021 and US sites in general falling 58 percent. 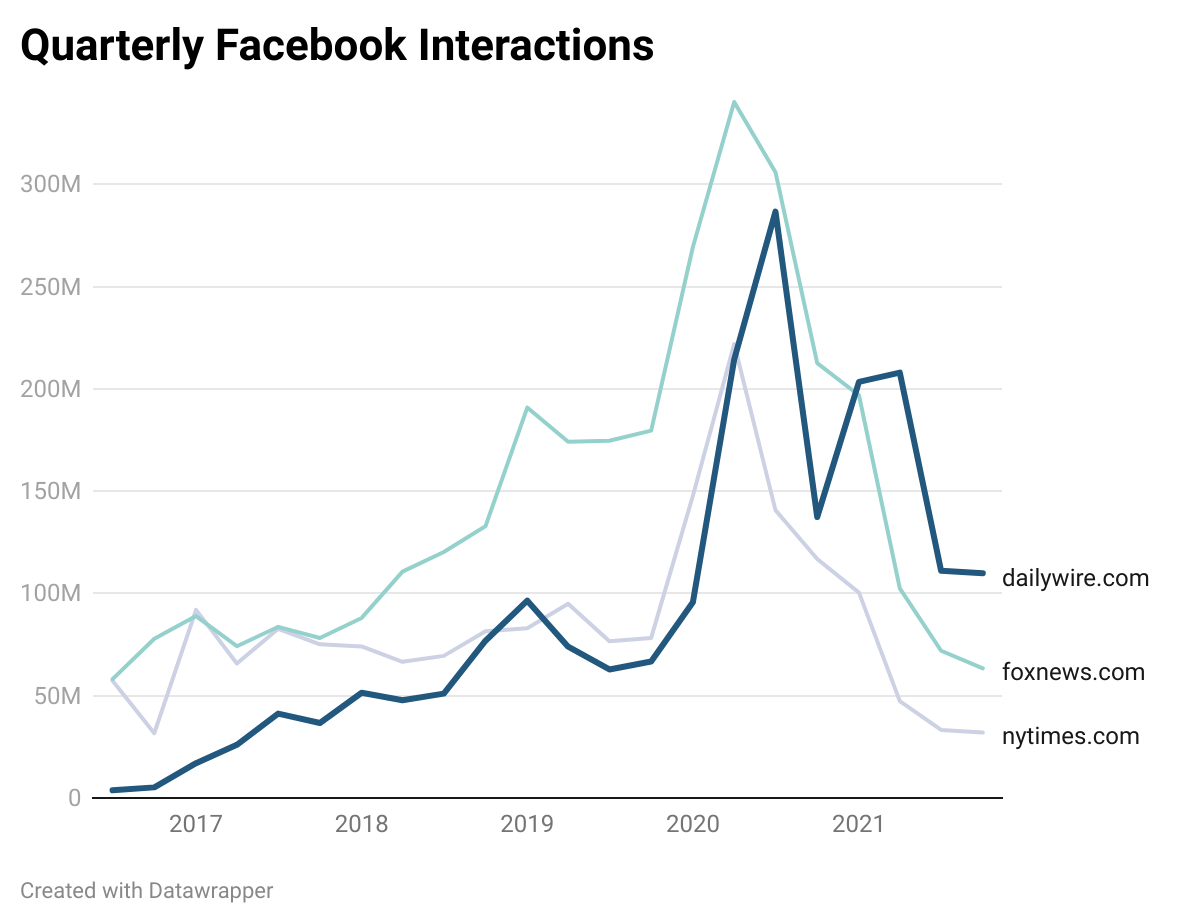 The Daily Wire achieves high interactions on its articles thanks to a network of official outlet pages. The site posts its articles across several pages run by The Daily Wire. Some are the pages of Daily Wire writers, such as Ben Shapiro, Matt Walsh, and Michael Knowles. Others are not clearly connected to the site based on their name and profile pictures, such as “Fed-Up Americans” or “The Angry Patriot.” For example, The Daily Wire’s top article of the second half of 2021, titled “DeSantis Responds To Biden: ‘I Am Standing In Your Way’ From Taking People’s Freedoms, ‘Do Your Job’” had 905,000 Facebook interactions and was posted 51 times across 17 different Daily Wire-run accounts:

Posting an article across official outlet pages is common, but the scale and opacity of The Daily Wire’s operation is unique. For example, the top article from NBC News, the outlet that most adheres to all of NewsGuard’s criteria, was “Fossil footprints show humans in North America more than 21,000 years ago.” The article received 936,000 Facebook interactions and NBC posted it 12 times across three different NBC-run pages, each of which include “NBC” in the page name and feature the NBC logo in the profile picture.

Children’s Health Defense’s verified Twitter account shares (retweets on posts by “blue check mark” accounts) have skyrocketed since the beginning of the pandemic and continue to grow every quarter, despite Twitter’s attempts to stem the tide of vaccine misinformation. Children’s Health Defense is a nonprofit chaired by Robert F. Kennedy, Jr., and describes itself as devoted to “exposing the fraud and corruption within the CDC and the pharmaceutical industry.” The site primarily publishes articles criticizing vaccines, which are then amplified on its social media channels and on Kennedy’s account.

According to NewsGuard, ChildrensHealthDefense.org “has published false and unproven scientific and health information, including about Covid-19 vaccines.” For example, a November 2021 article claimed that Dr. Anthony Fauci and Bill Gates “admitted what many … have been saying for months—that the [Covid] vaccines aren’t effective.” A June 2021 article falsely claimed that components of the Covid vaccine are toxic and can cause organ damage. 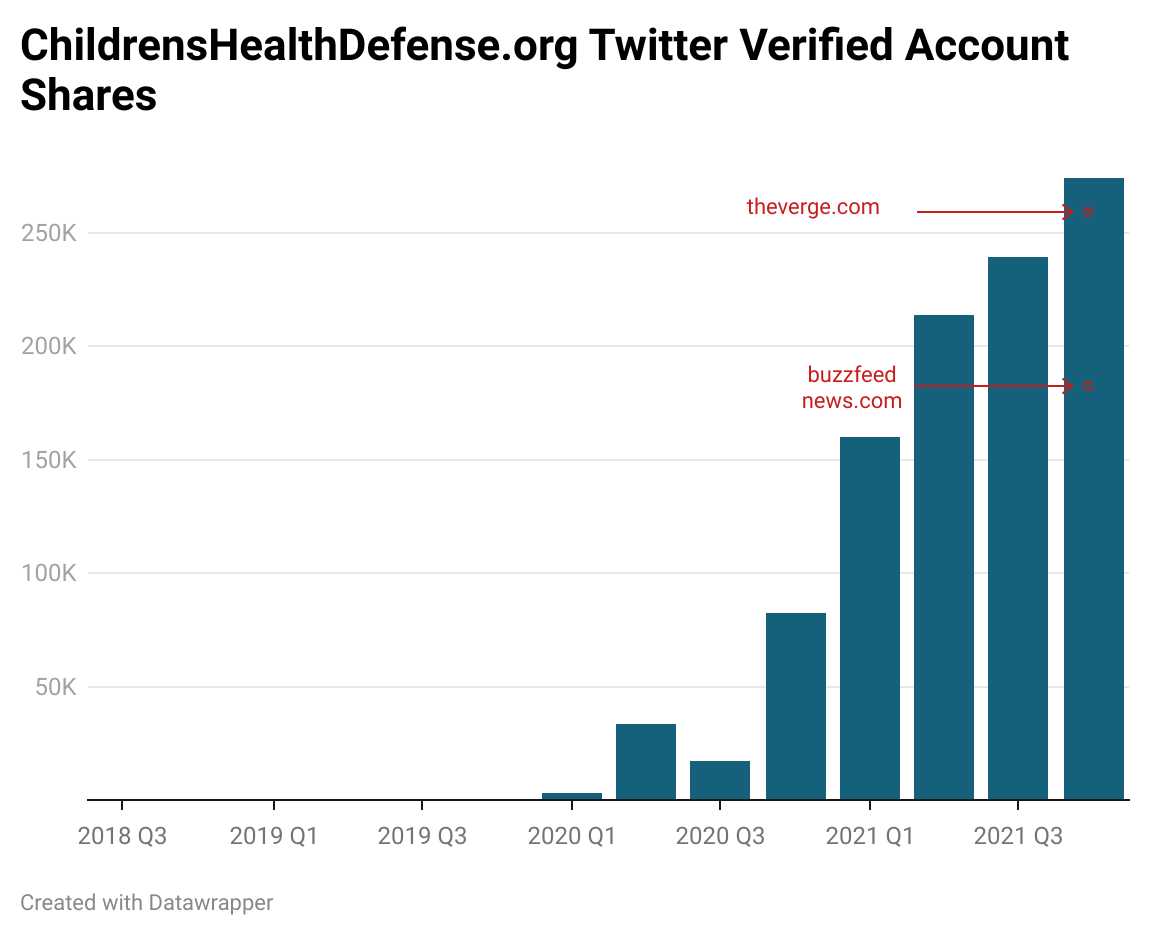 Most of these shares are driven by Kennedy’s Twitter account, which has 408,000 followers. The official Children’s Health Defense account has 104,000 followers. Both accounts have seen their number of followers more than double since January 2021, driven by increased engagement with vaccine-skeptical posts.

In March 2021, Twitter announced a “five strikes” account ban policy for misinformation about Covid-19 vaccines; it is unclear how many strikes Kennedy or the Children’s Health Defense account currently have. Instagram—which is owned by Meta, formerly known as Facebook—banned Kennedy in February 2021 over Covid-19 and vaccine safety misinformation, and YouTube suspended his page in March 2021. He remains active on Facebook and Twitter.

Despite heightened public scrutiny and increased policing from the platforms, news outlets and public figures are finding continued success in promoting vaccine-skeptical content. The success of false or misleading content on social media is not random, but rather baked into the design of the platforms themselves. An August 2019 internal Facebook memo found that “the mechanics of our platform are not neutral,” and core product mechanics such as virality, recommendations, and optimizing for engagement were a significant part of why misinformation flourished. The core way the platform functions has not changed. Recent research revealed that a tiny group of the most active users on Facebook—or “superusers”—have enormous influence over Facebook’s algorithm. The majority of these superusers are toxic, flooding Facebook with misinformation and hate speech.

The Daily Wire and Robert F. Kennedy, Jr., have seen their engagement increase substantially during the pandemic, as tech companies struggle with how to address misinformation and misleading content. Both remain active online today and will continue to spread anti-vaccine and vaccine-hesitant content absent independent action from the platforms or outside regulation from Washington.