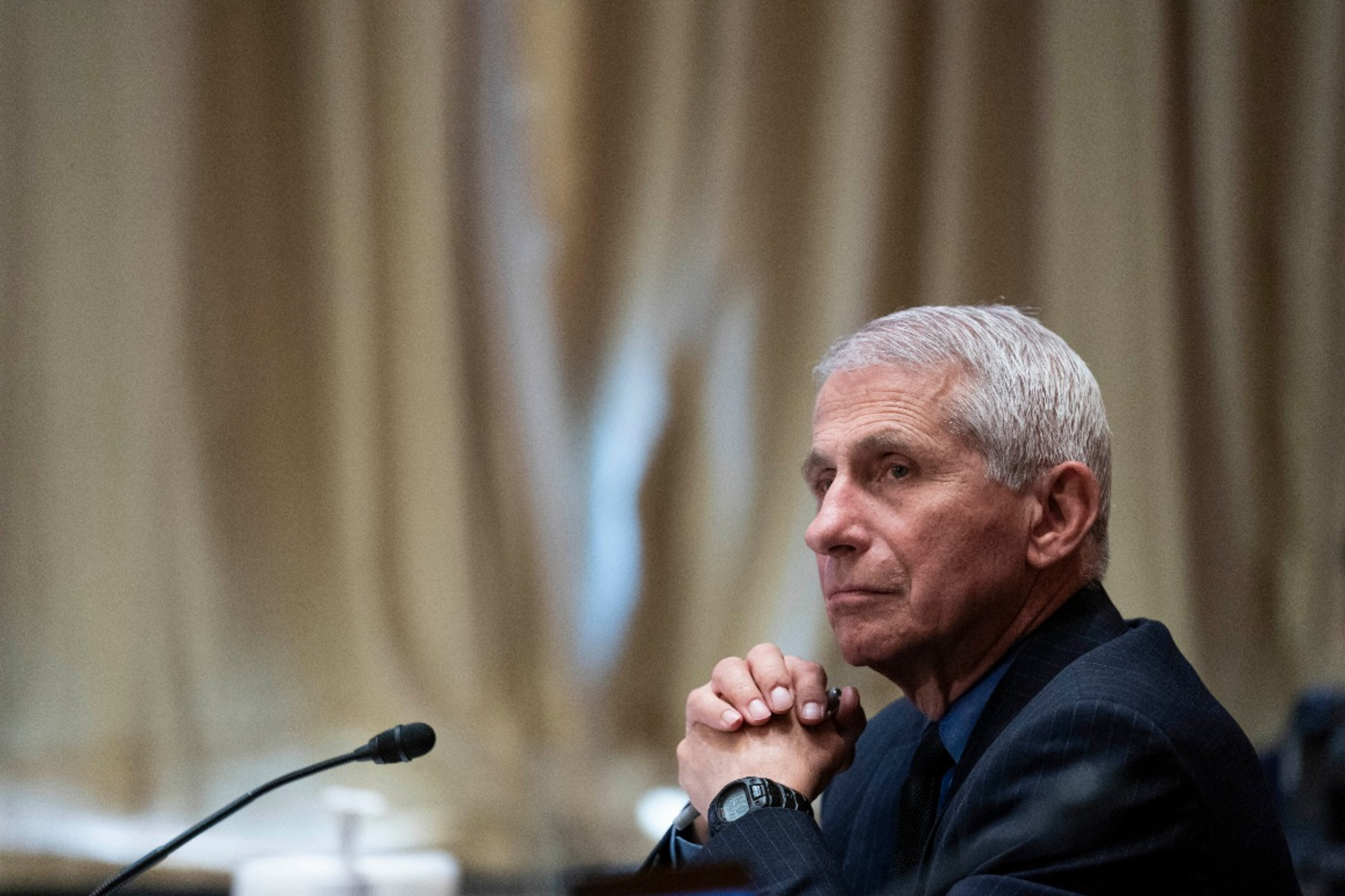 For over a year, Anthony Fauci has been a bogeyman for conservatives, who have questioned his handling of the Covid-19 pandemic and accused him of quietly undermining then-President Donald Trump.

But those attacks took on a whole new level of vitriol this week, to the point that one social media analysis described it as highly misleading and at least one platform pulled down some posts, citing false content.

It all stemmed from a tranche of Fauci’s emails that were published as part of a Freedom of Information Act request filed by various news outlets. Within hours of publication, the hashtag #FauciLeaks was trending on Twitter, accusing the nation’s top infectious disease doctor of lying under oath about the origins of Covid. It became a trending topic on Facebook too, where detractors added an inaccurate and more nefarious framing that the emails were secretly “leaked” — drawing on a playbook that has worked for partisans on the right in the past, despite the fact that Fauci's publicly disclosed emails were not state secrets.

Reddit and Facebook lit up with a fresh round of Fauci attacks, some of which called him a war criminal. Sen. Rand Paul (R-Ky.), perhaps Fauci’s most prominent bete noire on the Hill, quickly released Facebook ads demanding to “fire Fauci” and requesting a campaign donation.

And a round of conservatives, cherry-picking individual emails out of more than 3,000, argued that Fauci, who leads the National Institute of Allergy and Infectious Diseases, had privately supported a theory that the virus leaked from a Chinese lab and lied about masks in an effort to amass political power. Neither was true. Fauci has said he thinks it’s more likely that the virus spread from animal to human but would not rule out a lab leak, and while he initially downplayed the need for masks, it was, he said, out of fear that medical professionals would lose access to them if the public began panic purchasing.

The veracity and velocity of the new attacks, nevertheless, underscored the growing intensity with which Fauci animates conservatives some five months after Trump has left office. And they raised difficult questions for political and medical professionals about how much they should push back on the anti-Fauci campaign and what the cost would be if it went ignored.

“Targeting Fauci erodes trust in scientific institutions and makes them seem partisan – just as universities are increasingly seen as partisan, the media, the bureaucracy,” said Karen Kornbluh, senior fellow and director of GMF Digital at the German Marshall Fund of the U.S. “These strategies don’t have an easy response. You try to ignore them when they're not that widespread and even if you eventually refute them it can seem he said-she said. The best strategy — which the White House and Fauci seem to be taking — is to push ahead with an alternate positive narrative and action — in this case around vaccinations.”

For the White House, this has created a quandary: to defend Fauci from the incoming and risk elevating it, or to ignore it and assume it only gains traction with an audience that would never trust the Biden administration anyway.

Career government officials don’t often become political lightning rods. But Fauci’s role, the crisis in which he has operated, and the flow of information on social media, has created the perfect conditions for just that. A mild-mannered infectious disease specialist who has earned the admiration of Republican and Democratic presidents alike, Fauci is prone to bluntness. That has served him well as someone communicating to the public about complex and high-stakes pandemics and public health issues. But, starting in the spring of 2020, it has made his life tricky.

Trump insisted that he and Fauci worked fine together. But in the early days of the pandemic, the former president rarely hid his jealousy as Fauci became something of a public deity. Often Trump would proclaim that his judgments on Covid proved more prescient over time, like an early call to shut down travel from China. But Trump also routinely flouted the public safety guidelines that Fauci touted and their divergent approaches became an emblem for the then-president’s much criticized pandemic response, writ large.

The publication of Fauci’s emails only further animated Trump’s animus.

“After seeing the emails, our Country is fortunate I didn’t do what Dr. Fauci wanted me to do. For instance, I closed our Borders to China very early despite his not wanting them closed. The Democrats and the Fake News Media even called me a ‘xenophobe,’” Trump said in a statement Thursday. “In the end, we saw this was a life-saving decision, and likewise with closing our borders to Europe, specifically to certain heavily infected countries. I was later given credit, even by ‘Tony,’ for saving hundreds of thousands of lives.”

Trump’s attack was not particularly pointed compared to the others that have come Fauci’s way in recent days.

An analysis from GMF Digital at the German Marshall Fund provided to POLITICO showed that the online attacks on Fauci have grown more personal and egregious, with claims that he is “corrupt, a war criminal, deserves to go to prison, or is responsible for child abuse circulating on social media.” GMF Digital found four “misleading” themes across social media including that Fauci lied about masks and other public health measures. The organization found that on Facebook, the top posts about Fauci emanated from Paul as well as a host of conservatives, including Ben Shapiro, Donald Trump Jr., Steven Crowder, Dan Bongino and Newsmax.

According to data from Bully Pulpit Interactive, Republicans or conservative interests over the last month have spent $300,000 on Facebook ads targeting Fauci.

Nearly seven years ago, during the heart of the Ebola crisis, the Obama administration’s internal motto for handling challenging stretches was “PTFOTV”: Put Tony Fauci on TV. No one had more credibility with the public or was a better spokesperson, said Ron Klain, who acted as Ebola czar under Obama and now serves as Biden’s chief of staff.

But in an ever-polarized nation, Fauci too has fallen victim to tribalism. His advocacy for mask wearing and social distancing — in the face of Trump’s opposition — was met by vocal detractors across the country, who launched anti-mask protests and demanded the economy reopen. His conservative predictions about the pace of vaccine development and the timeline for reopening the country led to criticism that his expertise had been dramatically overstated.

But the attacks on Fauci have increasingly veered into the conspiratorial, experts say. This week, Fox News’ Tucker Carlson questioned why one of the emails involving Fauci was redacted, then speculated that it could mean Fauci was under investigation.

“Republicans employed the same attempts to divide and distract the American people in 2020. We know that these strategies don't work,” said Aneesa McMillan, deputy executive director of Priorities USA, a top Democratic super PAC. “The American people are looking for a concrete policy agenda that speaks to their priorities and improves their communities. The GOP has none of that — so they turn to fear-mongering and misinformation.”

At the heart of the current broadside against Fauci is reporting around — and the investigation into — the Wuhan lab leak theory, which holds that the virus leaked, accidentally or intentionally, from a virology lab in the city where it was first found. Republicans and right-wing media outlets have circulated such theories since the beginning of the pandemic even as scientists, including Fauci, insisted that problematic coronaviruses, from the SARS and MERS epidemics to Covid-19, were becoming increasingly common.

The pressure to probe Wuhan lab leak theories continued to mount, leading Trump’s White House to demand in April 2020 that the National Institutes of Health abruptly cancel a multimillion-dollar grant to EcoHealth Alliance, a nonprofit studying coronavirus origins that had worked with the Wuhan viral lab in the past. April emails between EcoHealth Alliance CEO Peter Daszak and Fauci, published as part of the recent FOIA, have become a new touchstone for conspiracy theorists, after Daszak thanked the NIAID director for dismissing lab leak theories early in the pandemic.

“I just wanted to say a personal thank you on behalf of our staff and collaborators, for publicly standing up and stating that the scientific evidence supports a natural origin for COVID-19 from a bat-to-human spillover, not a lab release from the Wuhan Institute of Virology,” Daszak wrote to Fauci on April 18, 2020.

“Many thanks for your kind note,” Fauci responded the next day, just over a week before POLITICO first reported that NIH canceled the EcoHealth grant. Daszak did not respond to a POLITICO request for comment.

Theories about a leak from the Wuhan virology lab became a consistent line of questioning for Republican lawmakers by last spring and soon turned into a mainstay of congressional hearings and increasingly contentious exchanges between Fauci and Paul, who sits on the Senate health committee. The longtime NIAID director and Kentucky doctor have exchanged barbs on television after Senate hearings where Paul accused Fauci of moving the goalposts on coronavirus science while the infectious disease scientist has told Paul that “with all due respect,” he was “entirely and completely incorrect.”

Paul was swift to accuse Fauci on Wednesday of knowledge of the Wuhan lab allegedly carrying out controversial “gain-of-function” studies, a field of research that alters viruses in a way that can make them more transmissible or help them hop to new hosts, such as humans.

A senior NIH official insisted to POLITICO that detractors such as Paul are taking Fauci’s emails “out of context.” But the prevailing posture, like that of the White House, was to downplay rather than engage.

“The FOIA articles are discussed like any other issues and then we move on,” the official said. “We're taking it seriously, of course, but it's not changing how we do business or our focus.”

Erin Banco contributed to this report.